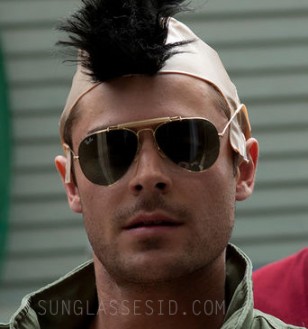 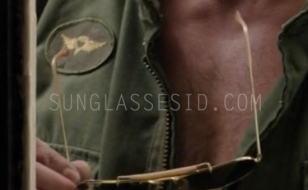 Zac Efron, as Teddy Sanders, wears several sunglasses in the 2014 movie Neighbors, including this pair of Ray-Ban 3029 Outdoorsman II sunglasses.

The Ray-Ban logo on the left lens can clearly be spotted and the Outdoorsman model can be recognized by the large bar over de nosebridge.

The difference between the 3029 and very similar 3030 model are the arms: the 3029 has normal ends behind the ears, and the 3030 has wrap around (curved) ends that really wrap behind the ears to keep the sunglasses in place during intense movement. Efron wears the 3029 model, we can see the temples in the film when he holds the glasses in his hand.

The glasses of the pair worn in the film are not polarized. When a pair of Ray-Ban has Polarized glasses there is a letter "P" next to the Ray-Ban logo on the lens.

Buy on Amazon.com
Buy on FramesDirect.com
Find on eBay