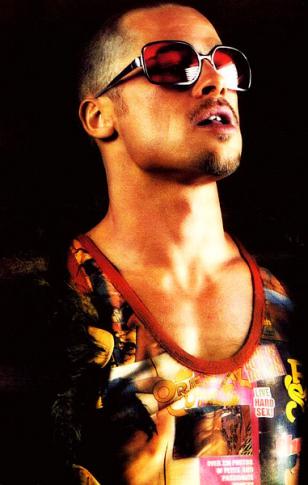 Brad Pitt, as Tyler Durden, wears a pair of Oliver Peoples 523 sunglasses in the 1999 movie Fight Club. These glasses are extremely rare, and can now only be found on sites like eBay.

In Fight Club, Brad Pitt wears three different types of sunglasses in the movie (all by Oliver Peoples: the Aero, the OP 523, and the Sunset, respectively). The OP-523 is by far the most popular (and hard to get!). Check eBay where you can usually find a few pair for very high prices.

10th anniversary limited release
Celebrating the movie Fight Club's 10th anniversary, Oliver Peoples re-released Tyler Durden's signature sunglasses in 2009. The 523, out of production since 2000, was available for a limited time in two color options: Silver frame with Blood-Red glasses and Gold frame with Orange glasses. Only 75 of each will be sold, so this will also be an instant collector's item.