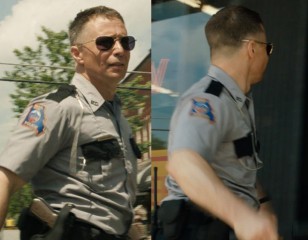 The film features Sam Rockwell as a police officer Jason Dixon, a role for which Rockwell won an Oscar as Best Supporting Actor and a Golden Globe. The co-star of the film Woody Harrelson also wears Randolph sunglasses, but the Intruder model.

Randolph Aviator sunglasses are often equipped with the bayonet arms, as in this film. The straight arms as clearly seen in the image.

Sam Rockwell also wears Randolph Engineering Aviator sunglasses in the movie Seven Psychopaths (also directed by Martin McDonagh) and in the movie The Best of Enemies.

Buy on Amazon
Buy on FramesDirect
Find on eBay