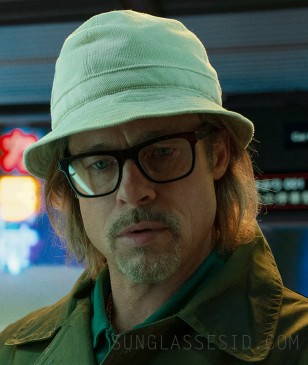 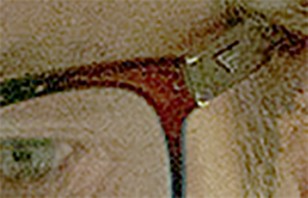 If we enhance the image, we can see a logo, at first we thought it was a winged Armani logo but it turned out to be the vintage Police Eagle logo.
photo ©
Sony Pictures

The Police glasses have a thick black frame and clear lenses. At first we thought it was an Armani model, when we enhanced one of the photos from the film. We can see what looks like an Emporio Armani logo on the temples, but this is actually the Police eagle logo of ‘90s inspiration.

Police Origins Bullet 1 VPLE37 col.700
This is the eyeglasses model as worn by Brad Pitt in the film.

Read more about these Police Origins glasses on the Police website or buy them on Pret A Voir (currently on sale).

This is an official brand collaboration, and the second time that Police connects itself to a Hollywood movie. In 2019, Police also supplied the eyewear for the Men in Black: International movie in which the main characters also wear Police Origins 1 models.

Buy at Pret A Voir