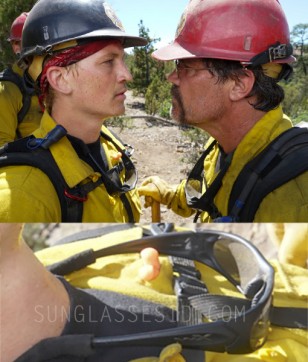 Miles Teller wears Wiley X Romer 3 sunglasses in the 2017 movie Only The Brave.

The sunglasses have a black frame and a silver Wiley X on the temples.

The Romer 3 is a full-frame, wraparound-style sunglasses, launched in 2014. The glasses are extremely strong, and Wiley X is a leading provider of protective eyewear to U.S. military, law enforcement and other tactical wearers worldwide.

A pair of Wiley X sunglasses was worn by Bradley Cooper in American Sniper.

Wiley X Romer 3 sunglasses are available online on Amazon, on eBay and FramesDirect.

Miles Teller plays fire fighter Brendan "Donut" McDonough in Only The Brave (Granite Mountain), a film based on the elite crew of firefighters who battled the Yarnell Hill Fire, a wildfire in Yarnell, Arizona in June 2013 that claimed the lives of 19 members of their team.

Buy on FramesDirect
Buy on Amazon
Find on eBay