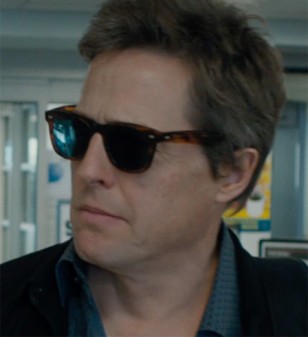 Hugh Grant wears a Wayfarer style pair of sunglasses in The Rewrite (2015). The glasses look a lot like Ray-Ban 2140 Wayfarer sunglasses with blue lenses and a tortoise frame, but the only thing that is different is that there should be a Ray-Ban logo on the temples but instead there is another metal dot, the same as on the front side of the frame. It migth either be a vintage Ray-Ban model (some older models used to have the dot instead of the logo on the temple), or a model inspired by the Wayfarer but from another brand.