Vintage Gold sunglasses - Brad Pitt - Once Upon A Time In Hollywood 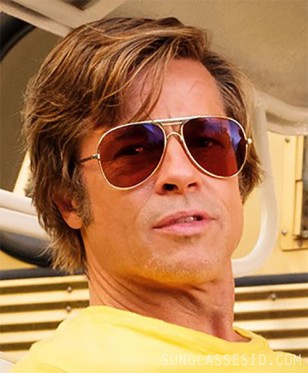 Brad Pitt wears vintage gold sunglasses in Quentin Tarantino's Once Upon A Time In Hollywood (2019).

Leonardo DiCaprio wears the exact same pair of glasses. The exact brand and model of the sunglasses are not known.

The glasses are probably a vintage pair, provided by Old Focals, a company specializing in rare vintage eyewear for films and series. They also provided their own Old Focals Architect model for Al Pacino in the same film.

Once Upon A Time In Hollywood is the 9th film by Quentin Tarantino and starring Leonardo DiCaprio, Brad Pitt and Margot Robbie. Set in Los Angeles, the film tells the story of television actor Rick Dalton and his stunt double Cliff Booth as they try to get involved in the film industry.