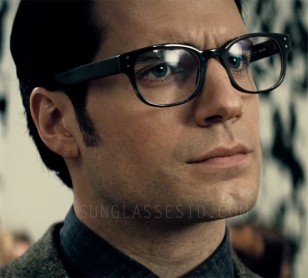 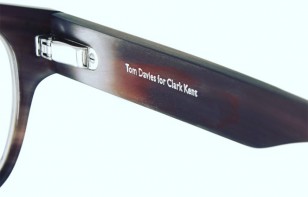 The eyeglasses have a dark frame made from horn, with two rivets (metal dots) on each side of the temple.

Tom was delighted to be asked to to create Henry Cavill’s signature frame for the role. Speaking about the collaboration and reason behind it, Tom Davies explains on his website:

“For years people have often asked me who I would like to design for, and I would always say - Clark Kent. I have always been fascinated by his ‘reverse superhero disguise,’ using his spectacles to disguise his secret identity, allowing him to be both a superhero and a man of the people. Many people think they can’t wear glasses or don’t suit glasses but most of the time it is simply that they don’t fit mass produced frames. As with 90% of the population, this was also the case with Henry Cavill. When I am bespoking for normal people, my aim is to complement their natural features to bring out the best version of them. With Clark Kent / Superman, I was trying to play with the lines of the frame to alter our perception of the character. The glasses had to look good, but I didn’t want to make it look like Superman was wearing cool glasses! It was an honour to work on this project. “

Tom Davies Bespoke designs
A Tom Davies Bespoke design consultation starts with getting to know the customer. To create a customer’s Bespoke frame, Tom Davies takes a series of precision measurements and photographs. These are sent to the TD design studio where the eyewear is designed and then submitted to be made in our workshop. TD Tom Davies produces all of its own frames. All Bespoke frames are finished with the name of the customer engraved discreetly on the inside of the temple arm, in this case Superman's name, "Clark Kent".

Thanks to Concave Brand Tracking for the alert