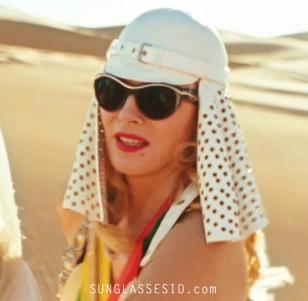 In Sex And The City 2, actress Kim Cattrall (as Samantha) wears several pairs of shades. The pair with the gold line along the front and sides, pictured on the left is from Belgian eyewear designer Theo, model Commodore. The designer of this particular pair is Tim Van Steenbergen. Kim Cattrall wears this pair in the Abu Dhabi desert, while riding a camel together with Sarah Jessica Parker (Carrie Bradshaw), who wears a pair of Aviators.

The Commodore is part of the collection of American Oldtimers presented by theo by Tim Van Steenbergen. The most noticeable characteristic of this range of sunglasses is the decorative strip on the frame, just like a decorative moulding that runs over bodywork. The colour of this strip can both contrast with the colour of the frame and form a tone-on-tone unit with it. Each model is available in 8 colours. Kim Cattrall wears the blue model with a golden strip.

In the first SATC movie, a pair of Theo Moby Dick sunglasses was worn by Samantha.

Thanks to Couture Culture and Miet Vaes (see messages below) for the ID!

Another pair that she wears in the film was recently identified as Roberto Cavalli Corniola.