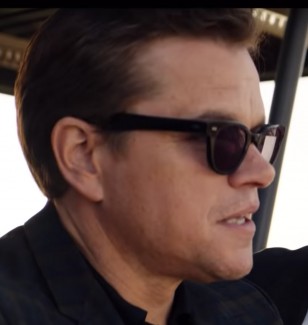 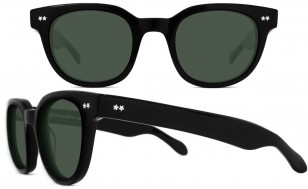 One of the pairs of sunglasses that Matt Damon wears in Ford v. Ferrari (2019) is the black Spectaculars Benjamin model.

The most visible pair in the film and on promotional photos are the Entourage of 7 Beacon sunglasses, but the black Spectaculars Benjamin look just as great on Matt Damon. The glasses can be seen in the first part of the film.

The Spectaculars glasses are made in the USA, have a black frame and two rivets in the shape of stars on each side and front of the frame.

Spectaculars is a vintage American sunglasses brand, and the Benjamin model is a classic model. As Spectaculars describes the model: "Circa 1945 Americans were all proud of contributing to make the world a better and peaceful place. Through sacrifice, hard work and creativity both men and women alike felt great self-accomplishments. They proudly wanted to reap these benefits and live life free with no limitations. The Benjamin was introduced with that proud intent of representing this same bold freedom. Its riveted strong comfort bayonet temples matched with a straight forward front brow gave it an overall look of brash Americana."

Based on that, the model is well chosen for the Carroll Shelby character, played by Matt Damin the Ford v. Ferrari film.

Get the sunglasses at Spectaculars for $275.

The movie is also knowns as Le Mans '66 in the UK and other countries.