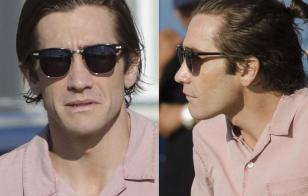 In the 2014 movie Nightcrawler, Jake Gyllenhaal is wearing a pair of 1950s style sunglasses, probably from the brand Shuron. It looks like a pair of black Shuron Ronsir frames (normally an eyeglasses frame) fitted with sunglasses. The Shuron frames in the film have a metal nose bridge, and the typical metal bars on the fron and the side of the frame.

A similar pair from Shuron (but not the ones seen in the film) is the Shuron Escapades which are slightly more rounded. Another great option with a similar style is the Ray-Ban 3016 Clubmaster.

Shuron Ronsir Zyl eyeglasses are often used in films, for example in The Good Shepard, Bobby, JFK and Armored.

Buy on Amazon.com
Find on FramesDirect