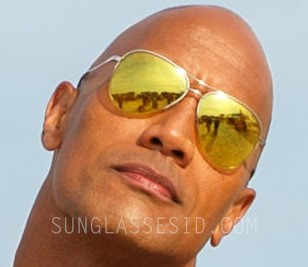 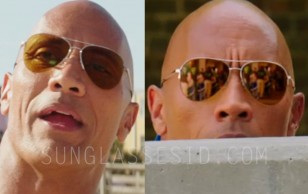 These sunglasses were custom designed for Dwayne Johnson by Sheila Vance, with direction from the film's costume designer Dayna Pink. The glasses are a new take on the aviator.

The name of the glasses, SYD, was originally the acronym for the secret project: the team at Sama Eyewear ​used S.Y.D. - "Special Yellow Dwayne" -​​ to refer to the aviator being crafted for the big screen​.

​The ​SYD ​Bay Elite gold frame is cast in titanium, slightly oversized to suit Dwayne's face. Infinity temples with acetate ends are durable and lightweight. For this frame a ​coated​ medium​-​mirror flash vapor coating was created aptly named "Beachside Meadow"; a more mild as opposed to fully saturated metallic ​lens was blended in a yellow-green tone​.​​​

The color choice, its mirrored effect and anti-reflective coating was ideal for look for the super​-​star hero of the beach for ​the ​ fun in the sun summer shooting in Miami over 3 months in 2016. According to designer Sheila Vance ​the custom tone took about a dozen custom color compounds to craft the ideal hue, ​and was selected to reflect well against the ​water​ and sand color, work with the red and blue tones of the lifeguard suit​ and capture the ​subtle tones of the sun from sunrise to sunset.

​A retail version of these glasses will be available for sale at Destination: Sama stores and online for summer 2017.