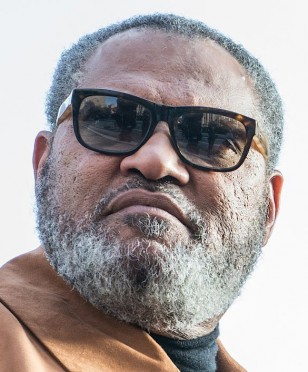 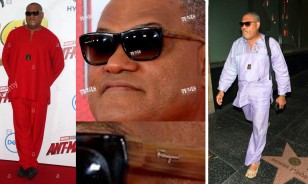 Laurence Fishburne wears the same glasses at the world premiere of AntMan vs The Wasp on 25 June 2018 (on these photos the Ferragamo logo can be spotted), and in Hollywood (at night) on 1 August 2018.
photo ©
Alamy / Wen

The sunglasses have a Wayfarer shape, tortoise (or 'havana') frame, and light havana, or semi-transparant tortoise arms.

It seems to be the same model sunglasses worn by Laurence Fishburne at the premiere of AntMan vs The Wasp on 25 June 2018, which was during the time of the filming of John Wick 3 (which began May 5, 2018 and wrapped on November 17, 2018). It's possible that there were many pairs of the sunglasses used for the filming of John Wick 3 and that Fishburne took one pair home and wore it at the premiere of AntMan.

He was still wearing the same glasses (at night!) on August 1st 2018, when he was captured by a photographer outside Katsuya Restaurant in Hollywood.

Unfortunately, this very stylish pair of sunglasses is not produced anymore, but you can try eBay, or find the Black version on SmartBuyGlasses.