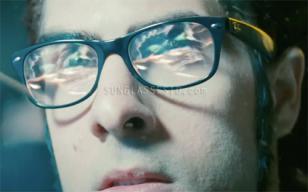 In the 2010 comedy Scott Pilgrim vs. The World, the evil Gideon Graves (played by Jason Schwartzman) is wearing a pair of Ray Ban RX 5184 eyeglasses. The glasses can be seen in the film as well as some of the movie posters. The eyeglasses seen in the film have a black shiny frame. The Ray-Ban RX 5184 are also known as the New Wayfarer, and have been spotted on several celebrities including Leona Lewis, Kelly Osbourne and Britney Spears.

The glasses are available at FramesDirect. Make sure to get the right configuration, as they come in different sizes and lenses.

This pair can also be see in the movie The Woman in the Fifth where Ethan Hawke wears them.

Buy on FramesDirect.com
Find on eBay