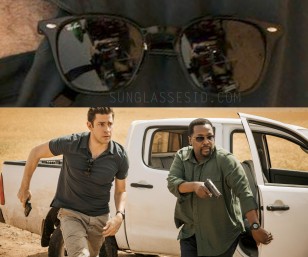 It looks like John Krasinski has a pair of Ray-Ban RB4259 in the tv series Jack Ryan.
photo ©
Amazon Prime

It looks like John Krasinski has a pair of Ray-Ban RB4259 or RB4258 in the tv series Jack Ryan. In the first two episodes of the first season he doesn't wear the glasses, but they're hanging on his shirt.

The model seen in the series has a black frame.

If you spotted this pair of glasses (or other sunglasses) in the rest of the season, contact us here.

Note that the Ray-Ban RB4259 is very similar to the RB4258: both models come in different sizes, so make sure to get the right fit for your face.

In the same series, Wendell Pierce, who plays James Greer, Jack Ryan's boss and former case officer for the CIA, wears a pair of RE Aviator sunglasses.