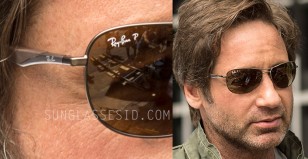 In some episodes of the 2016 season of The X-Files, David Duchovny as Fox Mulder wears a pair of Ray-Ban RB3519 sunglasses.

These pilot shape shades from Ray-Ban's "Active" collection have a gunmetal frame, polarized brown classic B-15 lenses (note the "P" next to the logo on the lenses, meaning the lenses are Polarized).

A screen-used pair of these sunglasses was offered during the Entertainment Memorabilia Prop Store auction in June 2022. In the Season 10 episode “Founder’s Mutation,” Mulder wore his sunglasses while he and Dana Scully (Gillian Anderson) investigated a secret mutation experiment. This auction lot consists of a pair of double bridge Ray-Ban sunglasses with gunmetal black frames and brown temples, as well as a red leather Ray-Ban glasses case with a metal snap-button closure. Also included is a 20th Century Fox Certificate of Authenticity.

Find on eBay
Buy on Amazon