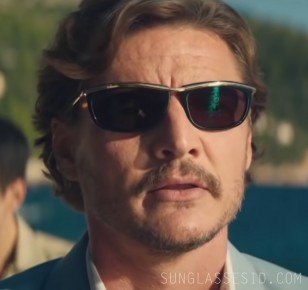 The original Ray-Ban Olympian I and II were introduced in 1965 and the sunglasses were famously worn by Peter Fonda in the movie Easy Rider in 1969. The new version of this model, the model features a gently curving (gold) metal bridge and rounded rectangle lenses, reinterpreting a classic with a sleek and elegant twist.

Another variation of the original model has a black plastic frame, reference RB2319, and this is the model seen in The Unbearable Weight of Massive Talent.

It looks like Pedro Pascal wears custom lenses in his frame, as the color seems different from the standard lens, and the Ray-Ban logo is not visible on the lens.

The Ray-Ban RB2319 Olympian can be found on Amazon for $155, or find them on eBay or FramesDirect.

In the same film, protagonist Nicolas Cage also wears a pair of sunglasses that are not yet identified.

Buy on Amazon
Find on eBay
Buy on FramesDirect