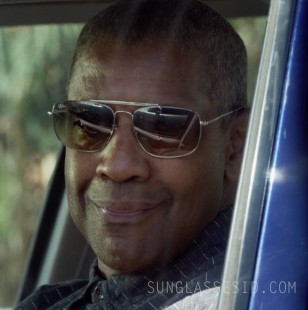 The Ray-Ban sunglasses are prominently worn by Denzel Washington's character in many scenes in the film.

The glasses are available in two sizes (58 and 61mm) and several color options.

Denzel Washington wears the Ray-Ban Colonel RB3560 sunglasses with the silver/metal frame and clear grey gradient lenses, but it's not certain which frame size.

Buy on Amazon
Find on eBay
Buy at SmartBuyGlasses