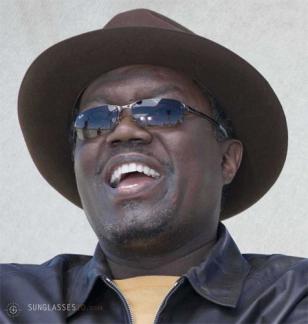 In the music movie Soul Men, Bernie Mac, in one of his last appearances before he died in 2008, can be seen wearing a pair of Ray-Ban RB 3217 sunglasses.

The exact color of the Ray-Ban sunglasses that Bernie Mac is wearing is matte black frame and brown lenses, color code 014/13. The lenses might be polarized, in that case it would be color-code 014/83. President Barack Obama has also been spotted wearing a pair of Ray-Ban 3217, but his sunglasses have a different color combination.

Bernie Mac (October 5, 1957 - August 9, 2008) was an American actor and comedian. Born and raised on the South Side of Chicago, Mac gained popularity as a stand-up comedian. After briefly hosting the HBO show Midnight Mac, Mac appeared in several films in smaller roles. His most noted film roles was as Frank Catton in the remake Ocean's Eleven and its two sequels and the titular character Mr. 3000. He was the star of The Bernie Mac Show, which ran from 2001-2006, earning him two Emmy Award nominations for Outstanding Lead Actor in a Comedy Series. His other films included starring roles in Friday, Bad Santa, Head of State, Pride, Charlie's Angels: Full Throttle, and Soul Men which was one of his final films.