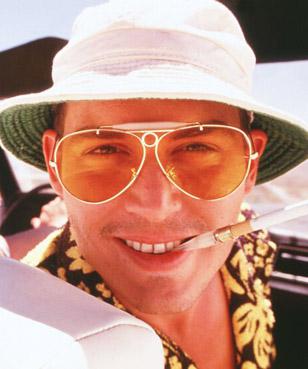 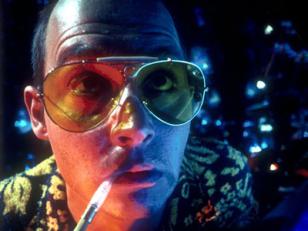 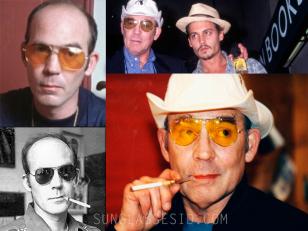 In the 1998 movie Fear and Loathing in Las Vegas, Johnny Depp wears Ray-Ban RB 3138 Shooter Aviator sunglasses. The glasses in the film have custom yellow glasses, but the model itself is still widely available.

The glasses worn in the film are directly inspired / based on the glasses worn by author Hunter S. Thompson, who wrote the book Fear and Loathing in Las Vegas. See image collage on the left of Hunter S Thompson wearing glasses, including the Shooter model with yellow tinted lenses, and a photo of him and Johnny Depp together.

Very similar to the Ray-Ban 3030 Outdoorsman, these Shooters have a little ring between the lenses, apparently this helps during hunting or shooting, hence the name Shooter.

You can get the Ray-Ban Shooter glasses online at Amazon.com, Amazon.co.uk, FramesDirect or eBay.