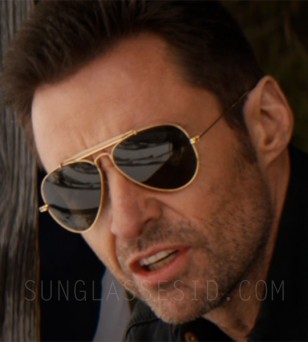 The glasses in the film have a gold (arista) metal frame. The Outdoorsman comes in two variations, the 3029 and the 3030. The 3030 has cable temples (see the curved temples that wrap around the ear in the product image), while the 3029 has the more standard temples. Read more about the Ray-Ban Aviator variations in our Guide to Ray-Ban Aviator sunglasses It looks like Hugh Jackman is wearing the 3030 model with cable temples, although this is not 100% confirmed.

Get the Ray-Ban 3030 for the best price online at Amazon USA, Amazon UK, SmartBuyGlasses USA, FramesDirect or eBay.