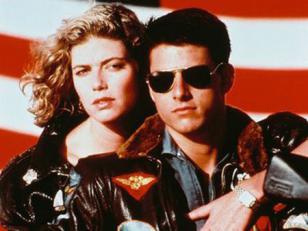 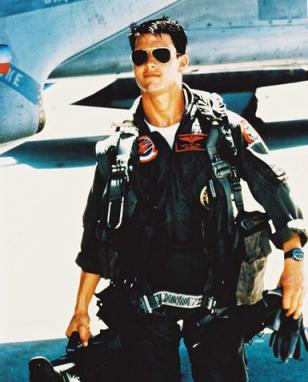 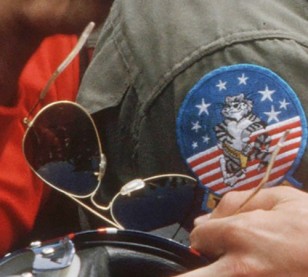 In this close up image from Top Gun 1, the glasses do seem to have a gold frame with transparant temple tips.
photo ©
Paramount Pictures

Actor Tom Cruise as Lieutenant Peter "Maverick" Mitchell, wears Ray-Ban 3025 (also known as the Ray-Ban Aviator) sunglasses in the 1986 movie Top Gun. Similar sunglasses were also used by other characters in the film.

The exact color of the Ray-Ban sunglasses that Tom Cruise is wearing is unknown, but it was probably a gold frame, with grey / green lenses.

According to Time magazine, Ray-Ban Aviator sunglasses sales jumped 40%, due to their appearance in Top Gun.

The Ray-Ban RB3025 Aviator is available in several sizes and color combinations.

Get the 3025 Aviator online at Amazon.com, Amazon.co.uk, FramesDirect (USA) or take a look on eBay.

The glasses will appear once again in the 2022 sequel Top Gun: Maverick.

Buy on Amazon USA
Buy on FramesDirect
Find on eBay