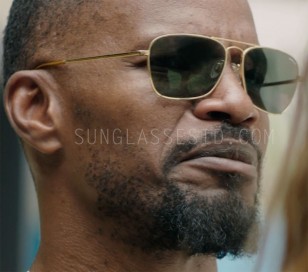 In the image from the film, the white Randolph logo on the left lens can clearly be spotted.

The sunglasses have a 23K gold-plated frame.

These sunglasses are named after the A-6 Intruder, a twin jet-engine, mid-wing all-weather attack aircraft. The Intruder is built to the same rigid military spec standards as RE's classic Aviator (also seen in many films and series) and provides a more rectangular shape with lenses that sit fairly closer together for additional coverage.

Get them at Amazon.com, on eBay or the Randolph website.