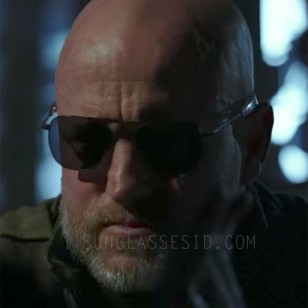 Woody Harrelson wears black RE Aviator sunglasses in War for the Planet of the Apes.
photo ©
20th Century Fox 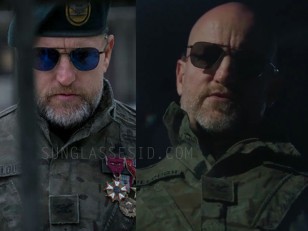 In War for the Planet of the Apes, Woody Harrelson wears black RE Aviator sunglasses which in the outdoor light seem to have blue lenses.
photo ©
20th Century Fox

Woody Harrelson wears black matte Randolph Engineering sunglasses in War for the Planet of the Apes (2017).

The Randolph sunglasses can be spotted during the meeting of Harrelson's character Colonel McCullough and ape tribe leader Caesar. The lenses look grey, although they look blue in outdoor scenes.

The RE Aviator sunglasses can be recognized by their typical bayonet temples, that are designed to fit comfortably under headgear.

The glasses can be seen in many films, for example Tom Cruise wears the same sunglasses in the recent movie American Made and in Oblivion and Michael Keaton wears a pair in American Assassin.

Randolph Engineering began as the American dream - two immigrants that started a company making machines to build the parts for other metal eyewear companies. As the others started moving overseas, Randolph started their own sunglass brand and remains the last of the metal eyewear companies made in the United States. Having had a contract supplying the standard-issue glasses to the military since 1982, Randolph is known for their exceptional quality and attention to detail.

Buy on Amazon.com
Buy on FramesDirect
Find on eBay
Buy on SmartBuyGlasses