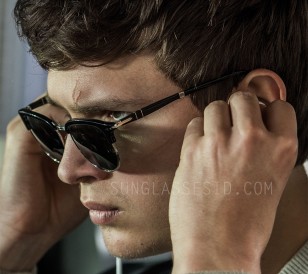 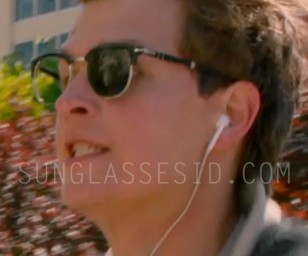 In this scene, where Ansel Elgort is running, the right lens of the Persol sunglasses is missing
photo ©
TriStar Pictures

In the film, Ansel Elgort wears the Persol sunglasses with a black frame and either the polarized Photo-Polar blue lenses with internal anti-glare treatment (color code 95/4N) or with more regular grey/green lenses (color code 95/31).

The Persol PO3132S folding sunglasses are from Persol's Cellor collection and are currently still available in black at SmartBuyGlasses (UK) and eBay. You can also find the glasses with brown (havana) frame at Amazon for different color combinations.

Ansel Elgort plays the protagonist of the film, a getaway driver, who does one last job for Kevin Spacey's character to get out of crime and settle with his girlfriend (played by Lily James).

See all sunglasses in Baby Driver.