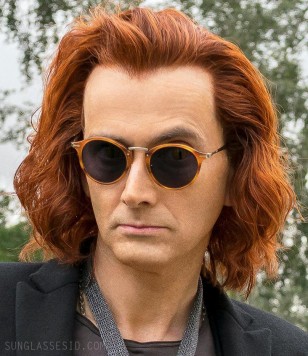 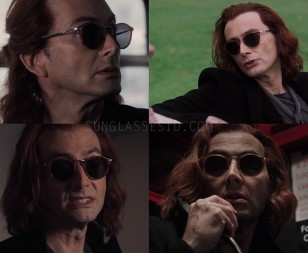 The Persol 3166 glasses worn in the first episode "In the Beginning".

The Persol PO3166 sunglasses have a light striped brown (havana) frame and the model is part of the Calligrapher Edition Series.

In the same episode he also wears a pair of Valentino sunglasses.

In the Good Omens series David Tennant plays Crowley, a demon who has lived on Earth since the dawn of creation. Originally called "Crawly", he is the Serpent who tempted Eve with the apple from the tree of knowledge of good and evil. The character hides his snake eyes with the Persol (and other) sunglasses.

Good Omens is a miniseries based on the 1990 novel Good Omens of the same name by Terry Pratchett and Neil Gaiman. The six episode series is a co-production between Amazon Studios and BBC Studios and stars an ensemble cast led by David Tennant, Michael Sheen, Adria Arjona, Jack Whitehall, Jon Hamm and Frances McDormand.