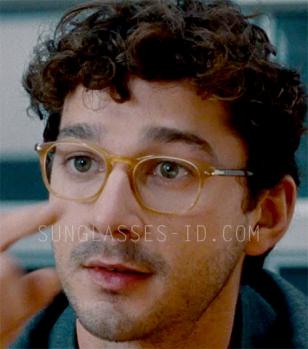 Shia LeBeouf wears a pair of Persol 3007 eyeglasses in the movie The Company You Keep.
photo ©
Sony Pictures Classics

In the movie The Company You Keep, the main character (played by Shia LeBeouf) wears a pair of Persol 3007 eyeglasses.

The Persol eyeglasses can clearly be seen in the film and on the movie poster.

This frame is available in several different colors and it seems like the glasses from the film have a Havana Honey 480 frame, but it might also be the Light Havana 96 (also called Light Tortoise) frame.

The Persol 3007 is currently not in production anymore, but can still be found online at eBay. The Havana Honey is harder to find, but the more popular colors Havana (Tortoise) or Black or Blue are usually still available.

Persol eyewear can often be spotted in movies and tv series, for more sightings, click here.