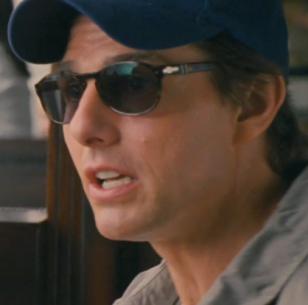 Tom Cruise is wearing the glasses during some action scenes that were recently filmed in Boston, and in the trailer they can clearly be spotted.

Cruise also wears a pair of Ray-Ban 3025 Aviator sunglasses with mirror lenses, just like he did in the movie Top Gun.