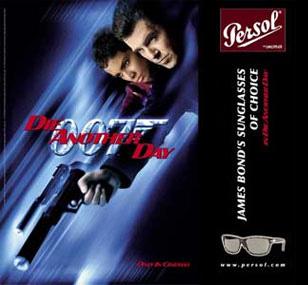 In Die Another Day, Pierce Brosnan as James Bond wears Persol PE2672-S, which were specially crafted by Persol to tie in the brand characteristics of the eyewear with those of the James Bond character - understated elegance and sophistication. James Bond is the ultimate confident, ultra-cool, classic character that is renowned for his impeccable style. The Persols featured on Bond are an accessory that reflects the distinctive style of his character.

Persol described the sunglasses like this in 2002:
"A new accessory for Bond and a new addition to the Persol collection, PE 2672-S is an upgraded version of the classic tortoise plastic frame with a dark brown crystal lens complete with the signature silver arrow on the temple."

The use of Persol sunglasses in Bond films was continued in Casino Royale, where Daniel Craig sported the 2244 and the 2720.