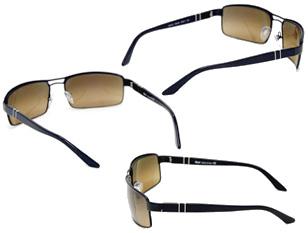 In Casino Royale, James Bond (played by Daniel Craig) wears two pairs of Persol frames during the film. At the start of the plot, Bond wears a Persol metal frame: Persol 2244. In the second part of the story after experiencing a number of adventures, James changes to Persol style 2720.

Style Persol 2244 features sporty chic design, constructed from a metal front joined to acetate arms by satin finish metal plates. It is characterized by a dynamic double bridge and by the exclusive Meflecto system with two cylinders. Available in a wide range color options, and in polarized versions. The shade wore by James Bond is option 834/33 which particularly sets off the personality of this model, with brown lenses and a gunmetal grey satin metal frame.

There is only one version that is the correct one (as seen in the movie), and that is the Persol 2244 with Brown lenses, color code 834/33. Look out for polarized and non-polarized versions of these glasses. These glasses do not come in a special James Bond box, but in the regular Persol box (the same, but without an embossed James Bond 007 logo).