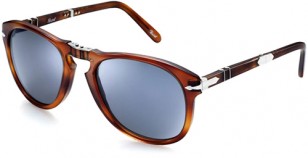 The Persol 714 glasses can be folded up, with hinges on the temples and between te lenses. The model with havana frame and blue lenses is named Steve McQueen, after the actor who made these glasses famous by wearing them in some of his films and in his private life.

Buy on Amazon.com
Find on eBay
Buy on FramesDirect
Buy on SmartBuyGlasses