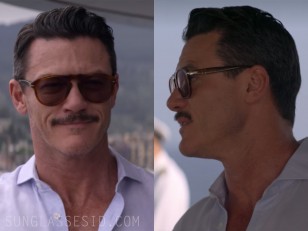 The sunglasses in the film have a brown (havana / tortoise) frame.

About the Persol 0649
First built in 1950's for tram drivers, the distinct nature and detailing/etchings of the frame made it a huge success. Copied over the by many of its competitors, however it wasn't until 1961 that they became instant legend when Marcello Mastoianni wore them in the film Divorce Italian Style. The 0649 features the signature Persol 'arrow' logo on the temples. Available in size 52mm and 54 mm.

A similar famous Persol pair is the 0714 which is a folding version of the 0649, made famous by Steve McQueen.