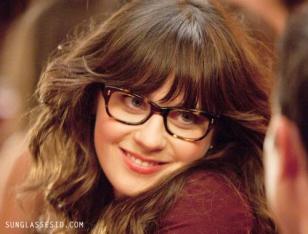 Jess wears the sophisticated ‘Wacks’ frame in 'Cocobolo' color throughout the show, which is the perfect complement to her quirky, ‘adorkable’ style. The feminine design is inspired by the masculine styles worn by Buddy Holly and Roy Orbison. Handcrafted of polished beveled acetate, this retro optical frame features dual plaques on the frame front and substantial temples. Includes the Oliver Peoples logo plaque laminated at the temple end.

For a limited time, this exact model (the 'Cocobolo') was available for purchase on the Oliver Peoples website, but not anymore. You can now find this one on eBay or Amazon, The Wacks model is still available on the OP website, but only in a different colors.

A long time friend and supporter of Oliver Peoples, Deschanel was the star of the 2009 Oliver Peoples campaign, which included print imagery and the sensational viral video To Catch a Tuesday. In conjunction with the campaign, Oliver Peoples produced a collaboration frame named “Zooey,” which was co-designed by the starlet and included a breath imprint of her ‘kissing lips’ on the lenses. Offered as both a sunglass and an optical frame, the Limited Edition style met with huge success. A percentage of the proceeds were donated to the Jenesse Center, a foundation committed to providing support and to changing the pattern of abuse in the lives of women and children.