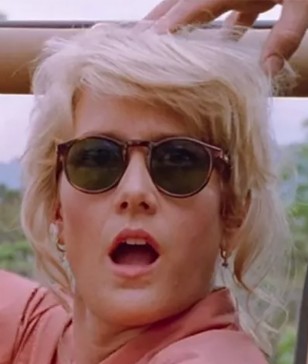 The round, vintage style glasses have a brown tortoise frame.

In the photo from the film we don't see the two rivets (metal dots) on each side of the frame that are part of the current O'Malley model. Perhaps the vintage model in 1993 didn't have the rivets, but we will try to confirm this with Oliver Peoples.

In the Jurassic Park film series, Laura Dern plays Dr. Ellie Sattler. She wears the sunglasses in the first film, when she and the others are driven around on Isla Nublar and she sees a real dinosaur for the first time. She famously takes off the sunglasses when she stands up in the Jeep.

During later scenes in the film she wears a pair of gold Oliver Peoples OP-7 eyeglasses.