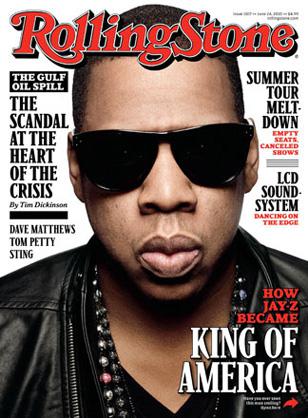 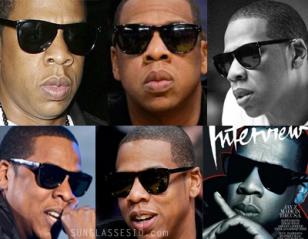 Jay-Z has been wearing these Oliver Peoples Daddy B sunglasses on many occasions
photo ©
misc.

Jay-Z has been spotted many times with his Oliver Peoples Daddy B sunglasses, most notably on the cover of the June 2010 issue of Rolling Stone magazine. In that issue he is hailed as the King of America, but he's also on his way to become King of Sunglasses, with his ever growing collection of modern and vintage shades. Jay-Z was sporting the Daddy B sunglasses also at Roland Garros in Paris, June 6th 2010. Jay-Z's famous wife Beyonce has also been spotted with Oliver Peoples sunglasses.

Oliver Peoples about their Daddy B model:
An exciting inclusion to the Oliver Peoples family, this 70s-retro unisex sunglass is hand-sculpted in a slightly oversized Mod shape and is available in vintage-inspired colors. Features miniature pin-detail accents on the frame front and a distinctive keyhole bridge. Core-wire is visible along the interior of the temples, while the exterior reveals embossed Oliver Peoples 20th Anniversary detailing. 6-based lens curve includes the option of CR-39 Polarized or Photochromic lenses, providing superior UV protection.