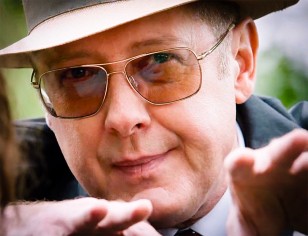 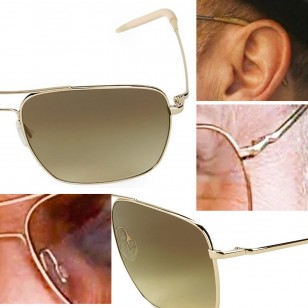 The details for this Oliver Peoples model match up with the sunglasses in the series: note the nose pads, curved arms and arm ends.
photo ©
NBC / Oliver peopleP

There have been many claims made on the ID of these glasses, but the correct model is the Oliver Peoples Clifton.

The glasses can be spotted in many episodes and promotional photos. The Oliver Peoples Clifton glasses worn by Spader have a gold frame, with unique bulge at the hinges, and the smooth Oliver Peoples arm ends. Also the nose pad details match this ID.

The Oliver Peoples Clifton sunglasses are available online in Gold or Silver at Amazon.com or on eBay.

Note that James Spader has sometimes been spotted with a different model sunglasses, with a similar gold frame but with tortoise sides on the arms (no ID yet).

In the same series, he has been wearing Rolex GMT-Master watches.

The same model glasses is worn by Pierce Brosnan in the movie Urge.

Buy at Amazon
Find on eBay