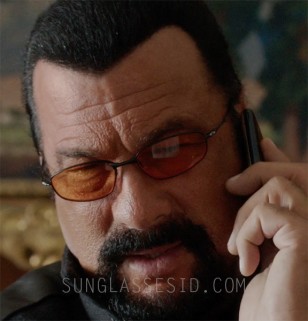 These wireframe glasses from Oakley have a black frame and (custom) dark bronze lenses. The Whisker is not available anymore on Oakley.com but you can find the frame on eBay.

Steven Seagal wears the same sunglasses in many other movies including Code of Honor, and The Perfect Weapon, General Commander and more.