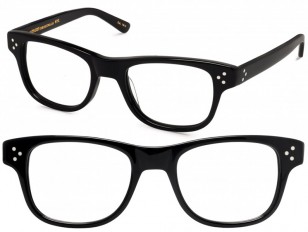 It looks like Jeff Bridges is wearing Moscot Zetz sunglasses in the movie The Only Living Boy In New York (2017).

The Moscot Zetz have three dots (rivets) on the front and sides of the black frame. The Zetz is a relatively new Msocot model, announced in Fall 2015.