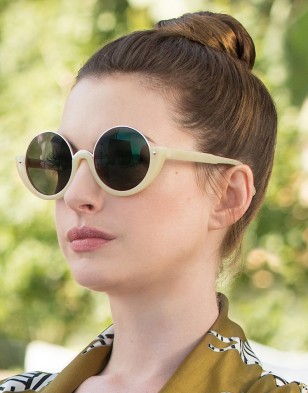 Close up of the glasses worn by Anne Hathaway in The Hustle.
photo ©
United Artists / Universal Pictures

The Marni ME614S sunglasses in the film have a round frame, with semi-rim or half rim. The frame is 70% Acetate and 30% Nickel Silver. The same model is available in other colours, but Anne Hathaway wears the model in the color Beige.

Find these sunglasses on SelectSpecs or search on eBay.

The Hustle is an American comedy film directed by Chris Addison and written by Jac Schaeffer. It is a female-centered remake of 1988 film Dirty Rotten Scoundrels which is itself a remake of the 1964 film Bedtime Story. The film stars Rebel Wilson, Anne Hathaway, and Alex Sharp.

Buy on SelectSpecs
Find on eBay