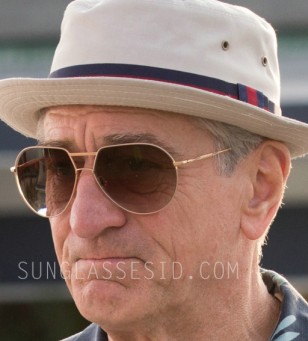 In Dirty Grandpa (2016), Robert De Niro wears a pair of Sama x Loree Rodkin Ashton aviator sunglasses with gradient lenses (thanks to Gigi for the alert).

This model comes in many different color variations, but it looks like DeNiro is wearing the Platinum model with white cloisonné (the gold models seem to have coloured cloisonné temples, while the DeNiro's glasses don't seem to have a color on the temples).

Loree Rodkin managed the careers of Hollywood superstars Brad Pitt, Robert Downey Jr., Sarah Jessica Parker and Virginia Madsen before turning her considerable talents to jewelry design. Together with Sama Eyewear she released a collection of sunglasses, some worn by celebrities, and in film, including the Loree Rodkin Hunter worn by Will Smith in Focus.