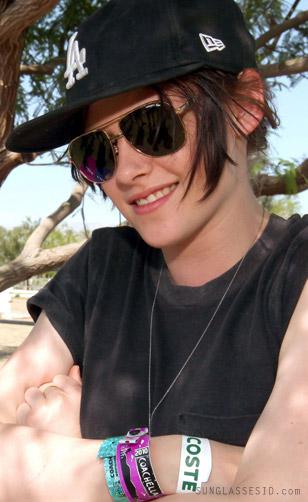 What distinguishes the Lacoste 101 from its aviator counterparts is that the bridge is inlayed with green enamel.
photo ©
Lacoste

Fresh off rocking her role as Joan Jett in The Runaways, the Twilight star Kristen Stewart pauses to pose at the Lacoste pool party wearing the Lacoste 101 30th Anniversary Limited Edition at the 11th annual Coachella Valley Music and Arts Festival held in the weekend of 17 and 18 April 2010 in Indio, California.

Featuring the classic dual bar and bridge signature of an aviator-style, the first pair of “La Lunette LACOSTE” sunglasses was first released some 30 years ago. Differing from other styles, the bridge is inlayed with green enamel and etched with a serial number that denotes the particular frame’s place in the series. With only 1000 on sale, you better get in before it’s too late. The Lacoste 101 is available in shopping havens such as Colette, Paris, Dover Street Market, London and 10 Corso Como, Milan. Visit www.lacoste.com to find a store near you.