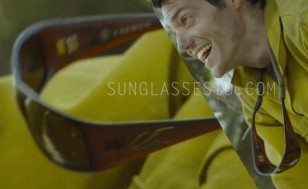 Alex Russell wears Kaenon Jetty sunglasses in the 2017 movie Only The Brave.

The sunglasses seem to have the brown frame, but it's hard to see which exact lens color. There are large Kaenon logos on the temples.

Kaenon Jetty sunglasses are available in many colors on Amazon, and eBay has a large selection. Also available in black on FramesDirect.

Alex Russel plays fire fighter Andrew Ashcraft in Only The Brave (Granite Mountain), a film based on the elite crew of firefighters who battled the Yarnell Hill Fire, a wildfire in Yarnell, Arizona in June 2013 that claimed the lives of 19 members of their team.