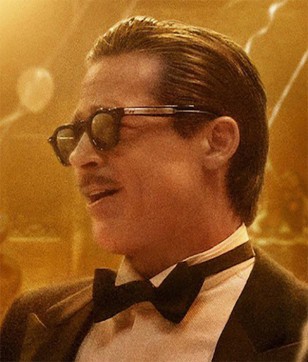 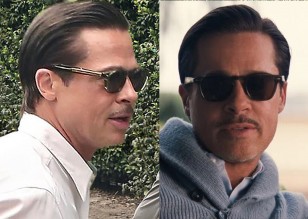 The sunglasses have a dark frame but semi-transparant, so you can see the metal frame through the acetate.

The movie is set in the 1920s so the costume designers found a frame with a pre-WWII shape. They found the Zuphirin model, from Jacques Marie Mage, a Los Angeles based producer of limited edition designer goods that specializes in micro production of artisanal objects.

Find the exclusive, Zephirin model on the Jacques Marie Mage website for $750 in different colors (most color limited to 350 pieces), although the exact color (dark frame, with visible metal frame) doesn't seem to be available.

With thanks to Banton Frame Works for the ID