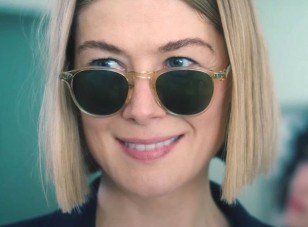 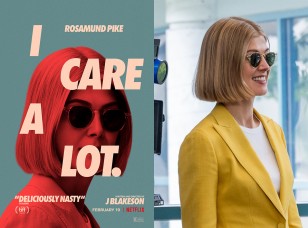 Rosamund Pike wears Garrett Light Hampton sunglasses in and on the movie poster of I Care A Lot.
photo ©
Netflix

The Hampton glasses can be found in many colors on the Garrett Leight website but also on Mr Porter, END Clothing (UK or US) or find a selection on eBay.

Rosamund Pike won a Golden Globe award for her role in the film I Care A Lot, in which she stars together with Peter Dinklage, Eiza González, Chris Messina, Macon Blair, Alicia Witt, Damian Young, Isiah Whitlock Jr. and Dianne Wiest.

Pike became internationally known after her role as James Bond girl Miranda Frost in Die Another Day (2002), for which she received the Empire Award for Best Newcomer. In that James Bond film she wears a pair of Ray-Ban 4122 sunglasses whle Pierce Brosnan wears Persol 2672 glasses.

The Garrett Leight brand was founded in 2010 by the son of the founder of Oliver Peoples, and has since become a very fashiobale eyewear brand.

Garrett Leight can also be seen on Ryan Reynolds in 6 Underground and Hitman's Wife's Bodyguard.