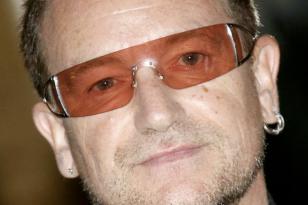 U2 frontman Bono with his classic Emporio Armani 9285 sunglasses 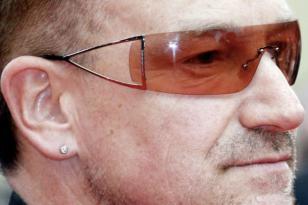 Side view of the original pink Emporio Armani Bono sunglasses 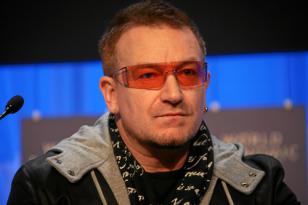 U2 frontman Bono wore these Emporio Armani 9285 sunglasses on the 2005-06 Vertigo Tour, and on many other occasions since. In addition to the Vertigo Tour color of silver frame, pink lenses, this Emporio Armani style is also available in additional colors.

In 2006, Bono and Emporio Armani flung their influential weight behind the Red campaign. The Red campaign is comprised of nine sought after brand names that all offer their own special edition Red products, including clothing, accessories and eyewear. With each purchase from the Emporio Armani Red collection, an average of 40% goes directly to the Global Fund, helping to eliminate aids in Africa.

These exact sunglasses have been discontinued by the manufacturer, so if you can find a pair online, get it! The new version of these glasses (part of the RED campaign) are very similar, have a look at those Armani Bono RED sunglasses.

Even though these glasses have become one of his most famous frames, Bono's favourite sunglasses brand is Bvlgari, according to an interview with the singer in Rolling Stone.