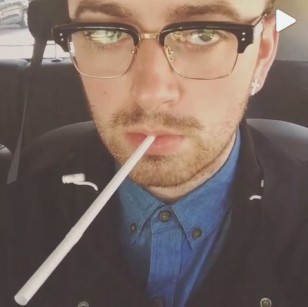 The Dita Statesman is a popular model with celebrities: the model was recently spotted on singer/songwriter Sam Smith. Soccer superstar David Beckham was one of the first to wear the model in 2011 and JT ("Can't Stop The Feeling") was wearing sunglasses Statesman on a yacht at Cannes 2016.

Sam Smith posted an image of himself wearing the black and gold Dita Statesman eyeglasses.

The DIta Statesman has a titanium lens rim with diamond detail and black plastic brow. The Statesman is available on Dita.com (USA only).

Thanks to James David Beckham for the alert