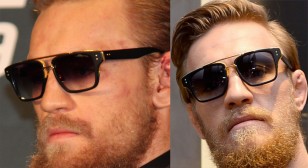 The sunglasses worn by McGregor have a black and 18Kt gold frame and brown gradient lenses.

The Dita Mach Three has an acetate frame with gold plated detailing and handcrafted Japanese acetate temples and titanium nose pads. These Dita glasses retail for almost $700. Still available at some online stores and you can sometimes find them on eBay.

McGregor is an Irish mixed martial artist who competes in the featherweight and lightweight divisions of the Ultimate Fighting Championship.