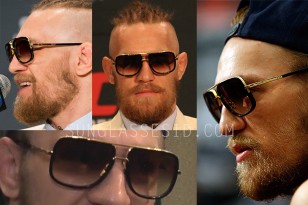 The sunglasses worn by McGregor have a black and gold frame and brown gradient lenses.

McGregor is an Irish mixed martial artist who competes in the featherweight and lightweight divisions of the Ultimate Fighting Championship.