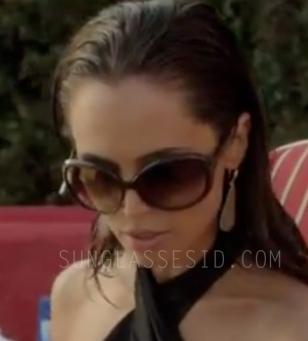 In the pilot episode of the new television series The Saint (2013), one of the main characters Patricia Holm (played by Eliza Dushku) wears a pair of Dior Cocotte sunglasses while sitting at the poolside, helping Simon Templar (played by Adam Rayner) via a laptop and phone connection. The Saint is a remake of the 1960s television series starring Sir Roger Moore as Simon Templar.

The Dior Cocotte glasses come in many colors, but the ones seen in The Saint seem to be the Dior Cocotte Brown Honey I5X, with brown fade lenses and brown frame. These beautiful sunglasses feature a very sleek design.

The glasses are available on Amazon.com, Amazon.co.uk and eBay.