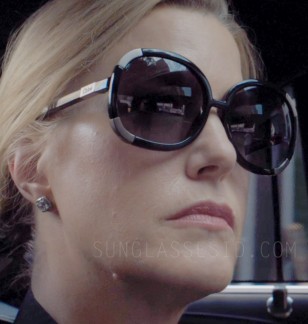 These oversized Chloé sunglasses have a black frame with grey on the corners.

The Chloé Myrte is a popular model with celebrities but this is the first time we see the glasses in a film.

In this Wall Street film from a female perspective, Anna Gunn plays Naomi Bishop, a senior investment banker who finds her career undermined by scandal and corruption.

Anna Gunn is best known for her role as Skyler White in the hit tv series Breaking Bad.